My wine professional experience has gone as follows: retail associate at a fine wine store, sales rep for a distributor, supplier rep for an importer, and manager of a distributor, and now, occasional blogger/retailer. I’ve always enjoyed my role as merchant and being a ‘collector’ has never been a priority.

While having dinner at a friend’s house the other day we had a wine experience that served as reminder to why people buy and hold wine. Our friend Peter loves wine and we love him as a customer because his orders go something like this, ‘Just buy me something good!’ When Peter pointed me to his very small collection of bottles I was not expecting to find- 1982 Pierre Bouchy Vosne- Romanee (a producer I’m not familiar with but the word Romanee gets me excited), 1982 Cavallotto Barolo, and 1966 Chateau Haut-Brion, just to name a few.

As it turns out Peter’s dads gave him the wine during a move and Peter said… “pick one.” Before long we were battling a soft cork and a low shouldered 66′ Haut-Brion. It didn’t look good but that didn’t matter, it was just fun opening something so rare. 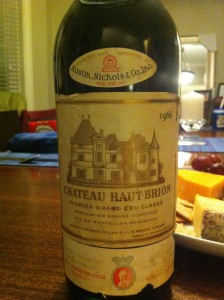 Once open, the wine wasn’t bad but it was definitely disjointed. It had wierd high-toned acidity but it had hope. We sat down and ate (enjoyed a 2009 Piaugier Sablet with braised pork shoulder and sweet potato mash… go Courtney!). After dinner, out came the 1966. It was sensational. After breathing for an hour and half  it had come to life. The front palate displayed all of the iron and mineralerality typical of an old Bordeaux. I kept thinking blood sausage, where iron meets sweetnees. The secondary flavors were all earth and the aroma of musty cellar… so inviting.

The wine was amazing but the real fun was sitting around drinking a wine from a decade all of us know of but none had experienced. Peter put on Bob Dylan’s Live 1966 album and reminded us that 1966 was controversial year where Dylan went electric. Dylan wanted to change, and thank goodness he did. Well this merchant might need a change too, time to lay down a few bottles.

One thought on “Unexpected Openings- 1966 Haut-Brion”