Thanks to everyone who attended the tasting last Thursday. It was generally agreed that it was a good day to taste through Burgundies (I’m of the opinion that some days are good tasting days/some bad- subject for a later post).

The whites were great (the Lamy St Aubin was drinking beautifully) but the reds was where the excitement of the room was. The focus was 2010 Burgundy, don’t ask why one 2009 made the list but it was a nice reference point for the two vintages. In general, 2010 is a sensational vintage. The balance of acidity to tannin is consistent. The wine has fruit but there is plenty of mineral, funk and the million other flavors that get people excited about Burgundy. The vintage is a stark contrast to 2009 which is fruity, fleshy, but not as structured. A very good vintage but if you like the more classic, acidic structured Burgundies then 2010 is more your speed. 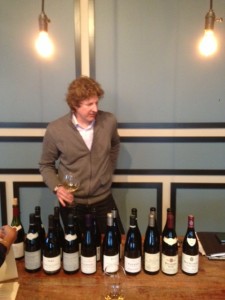 Pictured Dave Larson of Fine Vines getting ready for the event.

A few short notes on individual wines, complete list below.

Bruno Clair makes great wine. No revolutionary statement there. We had Clair’s Chambolle Musigny ‘Les Veroilles’ and Gevery Chambertian 1cr ‘Les Cazatiers’ on the table and it was a great example of difference of the two famous areas. The Chambolle was softer and more famine with a some black pepper quality and delicate red fruit. The Gevery was not huge but had more tannic structure, a lower tone and earthy flavors.

Benjamin Leroux was a standout and the most popular red as far as purchases go. Leroux is a young winemaker who cut his teeth at Comte Armand. I’ve tasted a number of his wines from various vintages and the wines are polished, precise, expressive and exciting. A very exciting young wine maker.

Domaine des Croix is a Beaune estate that was reestablished in 2005 (formerly the site of Domaine Duchet) with David Croix at the helm. I’ve tasted the wines and, like many Burgundies, there have been highs and lows. The wine we showed was a Premier Cru (I learned that the Beaune is ‘over- premier Cru’ed’ so supposedly it doesn’t mean as much) called Les Bressandes. The wine was wild and a great representation of the Beaune among mostly Cotes de Nuits wine. The wine was all earth and herbs with a racy acidity and great pallet presence.

The Lingier-Michelot Morey St Denis was beautiful. The wine was subtle and delicate. Very understated, very classic. Wonderful fruit that hit every point on the palate from beginning to end. A very well made wine.